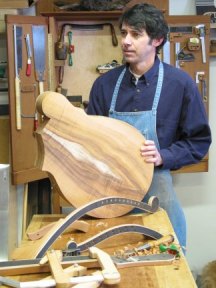 Illinois luthier Jim Worland builds just about anything that has a soundbox and strings. His offerings start out with very affordable steel-string flattops and move all the way into outlandish multi-string harp guitars.

Ilinois luthier Jim Worland was first inspired to build guitars in 1992 by classic instruments—vintage Martins and nylon-strings by Antonio de Torres. But today, he takes his cues from such outlandish builders as William Eaton and Fred Carlson, makers who are known for thinking outside the box and for playing with shapes, sizes, angles, bracing, and lots and lots of strings. “They really break the mold,” says Worland, “and have greatly inspired my designs of harp guitars and opened up the way I approach guitar design in general.”

Worland builds a wide variety of instruments—everything from the 24-string lyra harp guitar he built for Native American instrumentalist Echo Greywolf, to plain and simple parlor guitars that are very affordably priced. His designs are typically clean-lined, understated, and elegant. Worland loves doing custom work and is able to use such elements as topwoods, bracing patterns, and thicknessing to provide customers with exactly the tone they’re looking for.

“There are a lot of subtle things that add up to a good sound,” says Worland, “like tapering the top, making it thinner around the edges. It sounds like a guitar that’s been played a lot. The thickness of the finish is also really important. I try to get a real thin finish, and use traditional lacquer.”

When it comes to six-strings, Worland builds everything from 00s and OMs to jumbos. “I began by making smaller guitars such as parlors,” he recalls, “simply because I like playing smaller, vintage guitars. I have since been building larger guitars, like OMs and jumbos, and they have become my most popular models.”

Worland’s guitars vary quite a bit in their styling. Some are true to vintage specs, and others are more contemporary. “I am coming out with new models all the time,” he notes. “Some are inspired by guitars of the past, and some are based on more modern ideas, like my baritone and bass guitars.” He recently introduced a guitar with a carved top and a round soundhole—a hybrid of an archtop and a flattop. Smaller than most archtops, the guitar is intended for jazz and fingerstyle players. Worland’s new Prairie Model, a low-cost flattop with little ornamentation, is available with a cedar or spruce top for $1,450. “It has a matte finish on the back and sides, which saves a lot of time in terms of buffing,” says Worland, “but the materials and workmanship are still what I would put in a higher-end model.”

Worland works alone in a large studio behind his house in Rockford, Illinois. The building is more than 100 years old and has served as a sheet metal shop, a clock-making shop, and a pottery studio. “Most of my tools and machinery are much older than I am and will certainly outlast me,” he quips.

Thanks to a background in engineering, Worland has no trouble coming up with the jigs and fixtures he needs to build his instruments. In fact, he takes almost as much pleasure in tooling up as he does in creating the instruments themselves. “I use jigs extensively in order to increase the quality and consistency of my guitars,” he explains, “not just to save time.”

Worland typically builds in batches of four guitars and currently completes about 14 instruments per year. He has a predilection for unusual tonewoods. He’s happy to use standard rosewood and spruce if that’s what the customer demands, but he’s happier still to work with unusual combinations of woods. “More and more customers are open to using unique woods and getting away from the rosewood/spruce combination,” he says. “Some customers ship the wood to me—either as a guitar set or as rough logs. I love building with all different woods. Some customers come up with wood and styling combinations that I would never have thought of, and they end up working really well together. That’s one of the best things about working with clients to build custom instruments.”

The base price for most of Worland’s six-strings is very reasonable, and his current waiting list is six to nine months long. For more information, including detailed specs and options, check out his website.